If you can name the band referenced in this post’s title you know your one hit wonders.

Had this post all ready to go on the flight from Tokyo to Beijing. Then arrived in Beijing and totally forgot that Gmail/Google/Facebook/Wordpress/YouTube was a no no in China (Thanks comrades) and the VPN situation was kinda spotty. Anyway here it goes, need to catch you guys up….

Japan has been really really good to us. We are already thinking of when to come back (2020 Olympics perhaps?). We love the civility here. When we were having lunch at Harry Potter World at the busy restaurant, we noticed how relatively quiet and civil everyone was. You ordered at one station-by the time you went to another station your meal was getting plated, as you grabbed your meal there were several people finding a table for you, and when you were done they took the tray for you. No crazy kids running around everywhere. No napkins and food on the floor. Kelly and I both said this scene would not exist back home.

The civility extends to all the arigatos (“thank you”) as you exit a store or restaurant, the white gloved cab drivers in all the cities, the way the train conductor walks through your train car, opens the door to enter the next car, but then turns around and bows back to everyone in your car before he leaves. I mean, who does that? It’s kinda cool.

It’s also the thoughtful little things you notice. The trays you put your money in when buying something instead of handing money directly to the person behind the counter. The sensors on train toilets-wave your hand over one and the seat lifts up/down, wave your hand over the next one and it flushes. The provided wipes for toilet seats. Kelly even mentioned some sort of disposable mat if you needed to change in the stall. (At least thats what we think it was). The small sink next to the trash can to dump your partially full drink before throwing it away. The tiny soy sauce dispensers that look like tiny fish when you get take out sushi. The umbrella bag dispenser- you put your wet umbrella in a slot and move it towards you and your umbrella is covered as you walk into a store.

So we spent 3 weeks in Japan. After starting in Tokyo, we took the shinkansen, the bullet train, to check out some of the rest of the country. Here’s my take on each stop.

A great respite from uber urban Tokyo. About an hour and a half away. Up in the mountains, huge lake with views of Mt. Fuji-even though it was overcast when we were there. We saw a Swiss cowbell (more cowbell!) at our train stop-kinda random, maybe they bought the funicular train we took up the mountain from the Swiss? The place reminded me more of Europe than Asia.

Our stay at the traditional Ryokan was definitely one of the highlights of the trip so far.  At check in you leave your shoes at the front desk and walk around with socks/wooden flip flops on hallways lined with tatami matts for your entire stay. We were given Kimonos to wear all around the Ryokan-who doesn’t like walking around in a comfy robe everywhere? We even had two different types to chose from. The onsens- public hot springs/baths, the 12 course Japanese dinner in our own private room. The multi course breakfast of smoked/raw fish, rice porridge. Its was actually really good and all the girls liked it as well. The service was on a completely different planet than I am used to.

Not sure if you can read that-its lots of food.

Hakone also had this great open air art museum-apparently the first in Japan. What was great about it was the beautiful gardens with huge sculptures mixed in with very kid friendly, hands on play structures. There was a huge Picasso museum as well. This is what the Japanese spent their money on in the 80’s. 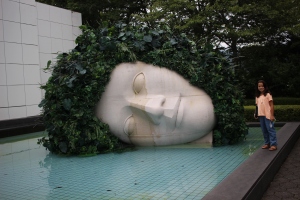 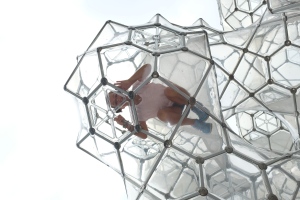 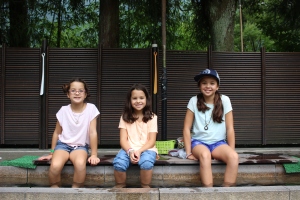 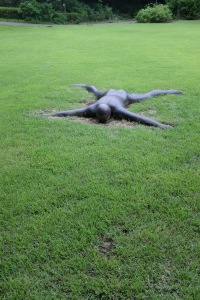 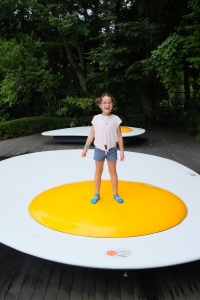 Two hours on the bullet train and we were in Kyoto. We stayed at a hotel above the train station which I know sounds weird but this is not like any train station I’ve ever seen. It was like a small city unto itself – 20+ stories up and several city blocks long with malls in and under it. There was a floor just with different types of ramen shops based on region. It was pretty easy to take little short trips from there. Kyoto is a less dense city than Tokyo and has more natural beauty. We also got to walk through typical Japanese neighborhoods.

The girls really loved the monkey park overlooking the city. Only in Japan-here the humans get put in a cage to feed the monkeys. We were told not to stare directly into the monkey’s eyes. NO MAD DOGGING the monkeys. That is how Planet of the Apes started. We also loved the Bamboo Forest, and the boat ride we took on the river on a traditional boat with a guy just using a long bamboo pole to get around. We spent the rest of the time just checking out the food. We saw one temple, but that was about it. When it was raining we spent an hour after dinner hanging out in a huge electronics stores in the massage chair section-which was the most packed department in the entire store. 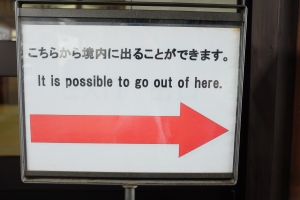 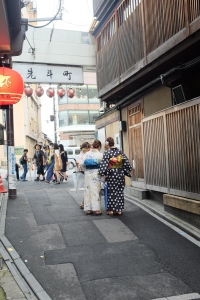 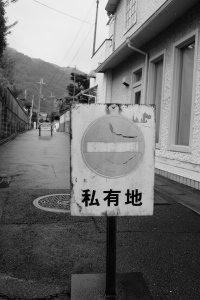 Do not feed the humans 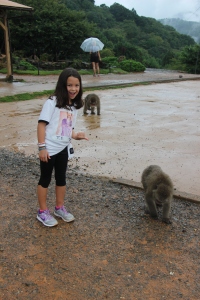 Grace: Look Dad, its a monkey.

Up the river with no paddle-just a bamboo pole 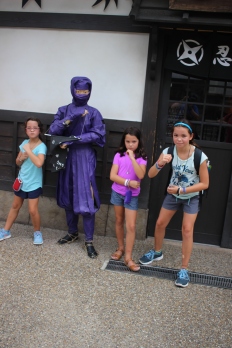 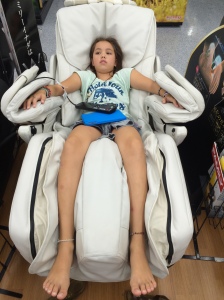 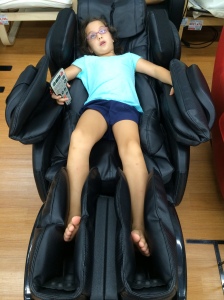 My Ninjas in massage chairs after a full day of Ninja-ing.

We went to Osaka mainly for Harry Potter World and I wished we had stayed a little longer to check out the city. It had a really cool vibe. I read that Osaka is a little more laid back and less reserved than Tokyo or Kyoto. We stayed at our first Airbnb in the Shinsaibashi neighborhood. Initially it was a disaster. Its was run by a property manager and the unit’s owner hadn’t paid the electricity bill, so we were without electricity or internet when we got there. Thankfully we got a hold of the property manager and I told her if the electricity wasn’t turned on by 5:00pm (it was 3:00pm at the time) we were out. She said she would pay the bill herself and by 4:30, and after a hefty discount on our rate, we were good.

As for the Shinsaibashi neighborhood – it might as well be in Brooklyn. Hipsters, fixie bikes everywhere. I got a hold of the property manager using the free wifi (4 times) from Saturdays/Surf NYC- the surf/coffee shop playing Jack Johnson. We got tacos with tortillas made from scratch in the Nacho-Libre Mexican wrestling themed restaurant around the corner. For breakfast we had overpriced (but thick and delicious) toast.

Lets face it, Hiroshima was pretty heavy but I’m glad we went. Claire and the twins had just read the book Sadako and the Thousand Paper Cranes and her memorial is in the Peace Park. All the girls made lots of paper cranes to leave at the memorial. Just an immense feeling of the power of place given what happened here really not that long ago. The museum was pretty intense, too intense for the twins-hopefully we didn’t scar them for life-what were we thinking? 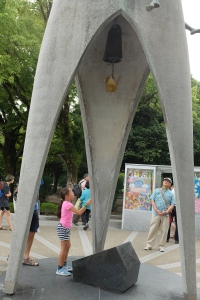