We just spent two weeks in Wien, Osterreich (Vienna, Austria). We truly lived like the Wieners (Viennese), and Wieners live a good life.

Vienna has always been a special place for me, I spent a semester here in the fall of 1992 when I was in college. To give you a sense a how long ago that was, it was the first time I heard of this thing called “email.” It was easily the best part of college for me. I roomed with kids from the University of Denver and Oklahoma.  We had orientation in the Austrian Alps.  We had the 2nd pick of housing, so we had a huge flat without a live-in hausfrau (landlord) so we could throw parties.  We were also one of the few places with cable TV so everyone came over on Saturday for Notre Dame football.  On weekends we went to Prague, Budapest, and Salzburg.  I went to Oktoberfest in Munich ALL THREE weekends to meet with other classmates who were studying all over Europe.  I remember it was so packed in the Lowenbrau tent one weekend that I had to sneak in through the kitchen.

So I was really excited to show Kelly and the girls the city. Surprisingly most of my German came back to me so it made things a little bit easier. I’m pretty sure asking for a table in German scored us a table for 5  at the famous Schnitzel restaurant Figlmuller when all the other tourists were turned away and told they were booked all day.

Schnitzel as big as your head

Vienna was easily the most mellow city we have visited. Its beautiful, clean, and refined. You can hear classical music or opera everywhere. Everyone bikes here as well. While we were there the weather was amazing, mostly warm and sunny, which was a stark contrast to the last time I was here, I remember wanting to see the sun every once in a while. The other HUGE thing that I noticed is that Mexican food finally made it over, we even had a Chipotle like restaurant down the street from us, Gorilla Kitchen.

Here were some of the highlights from our two weeks in Wien:

Schloss Schonbrunn- The summer palace of the Hapsburg monarchy. It’s the Versailles of Austria.  Marie Antoinette, before she went to France and lost her head, grew up there. Amazing gardens, a zoo, tons of outdoor trails. The girls loved hanging out there so much we went back 3 times, mainly to spend time in the maze garden and the children’s playground. They also visited the children’s museum where they dressed up like royals and learned about life as a kid in the palace.

Hanging at the Schloss 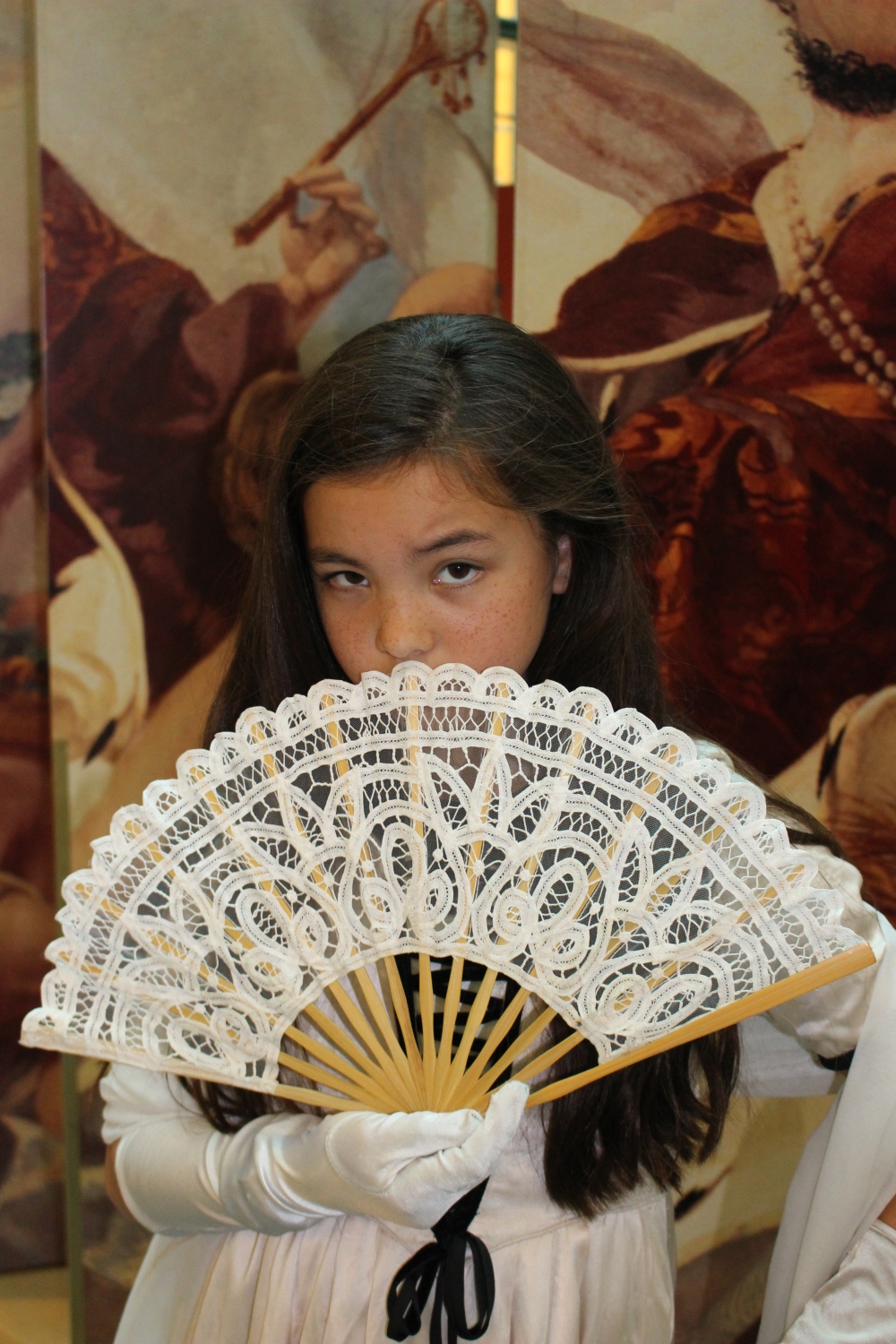 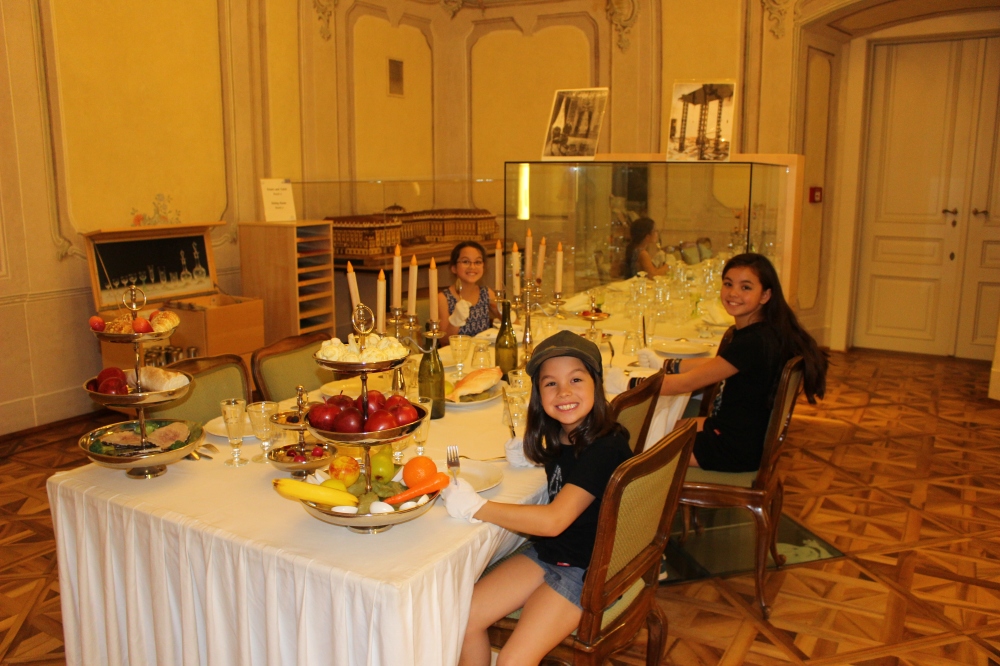 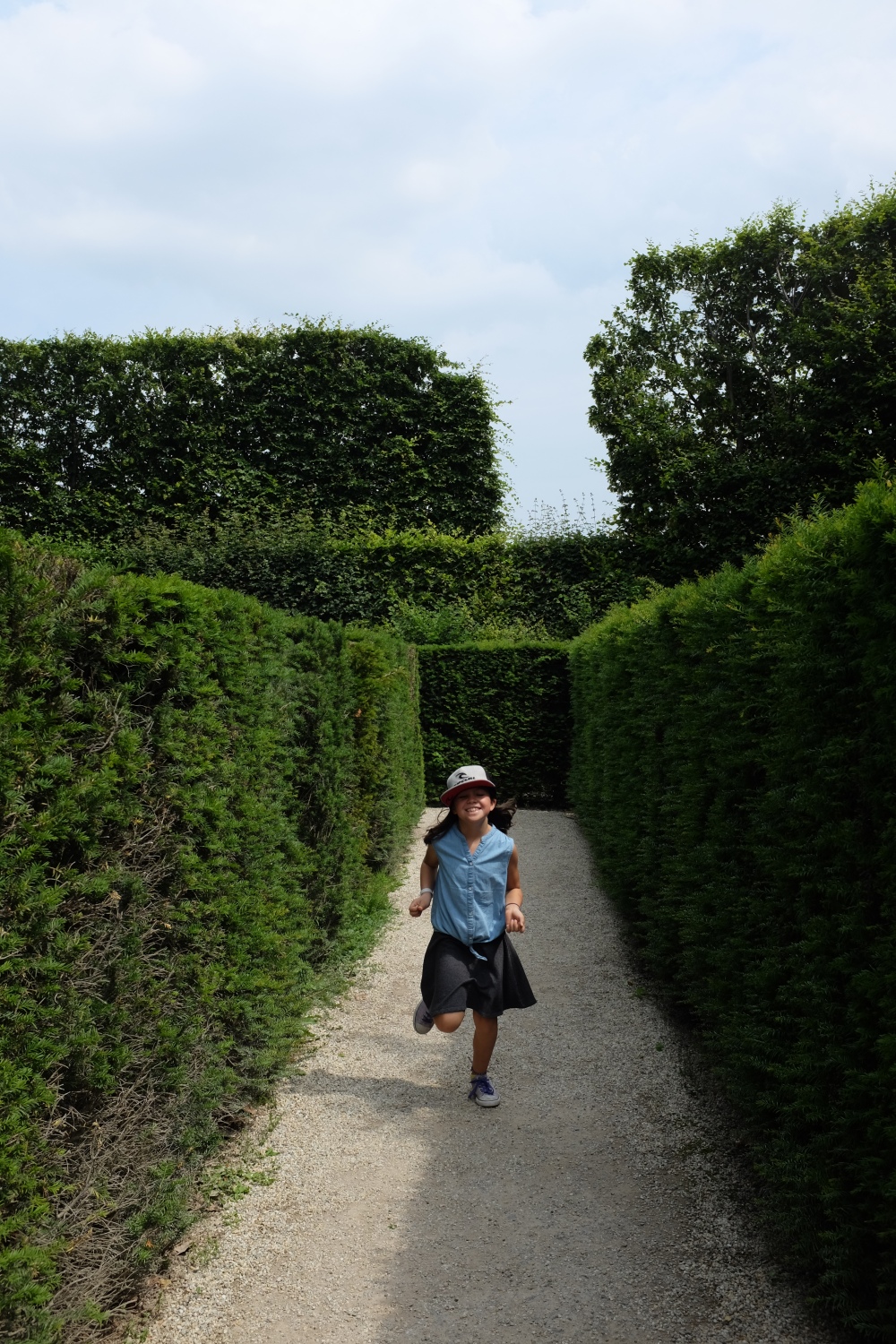 Visiting my old school and old apartment – I had been in touch with my old school, The Institute for European Studies (IES), Vienna- and had arranged a tour while we were there. Our tour guide, Penelope, who is an aspiring opera singer, not only made us feel welcome, but she also came over and watched the kids for a couple nights!  The school was pretty much the same as when I attended.  It is in an old city palace, complete with red carpet, a mirrored ballroom, and ornate ceilings.  I sometimes found it ridiculous that I was taking classes there.  We also stopped by my old apartment building and neighborhood.  The biggest change was that they got rid of the old phone booth across the street where I used to put a million coins in to call home. I feel old just typing that. 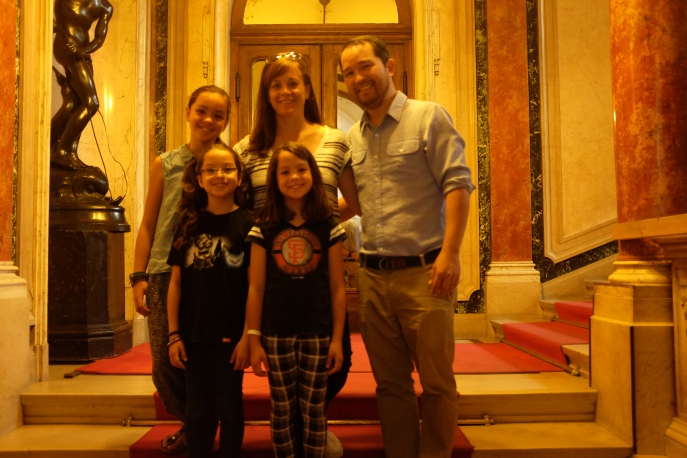 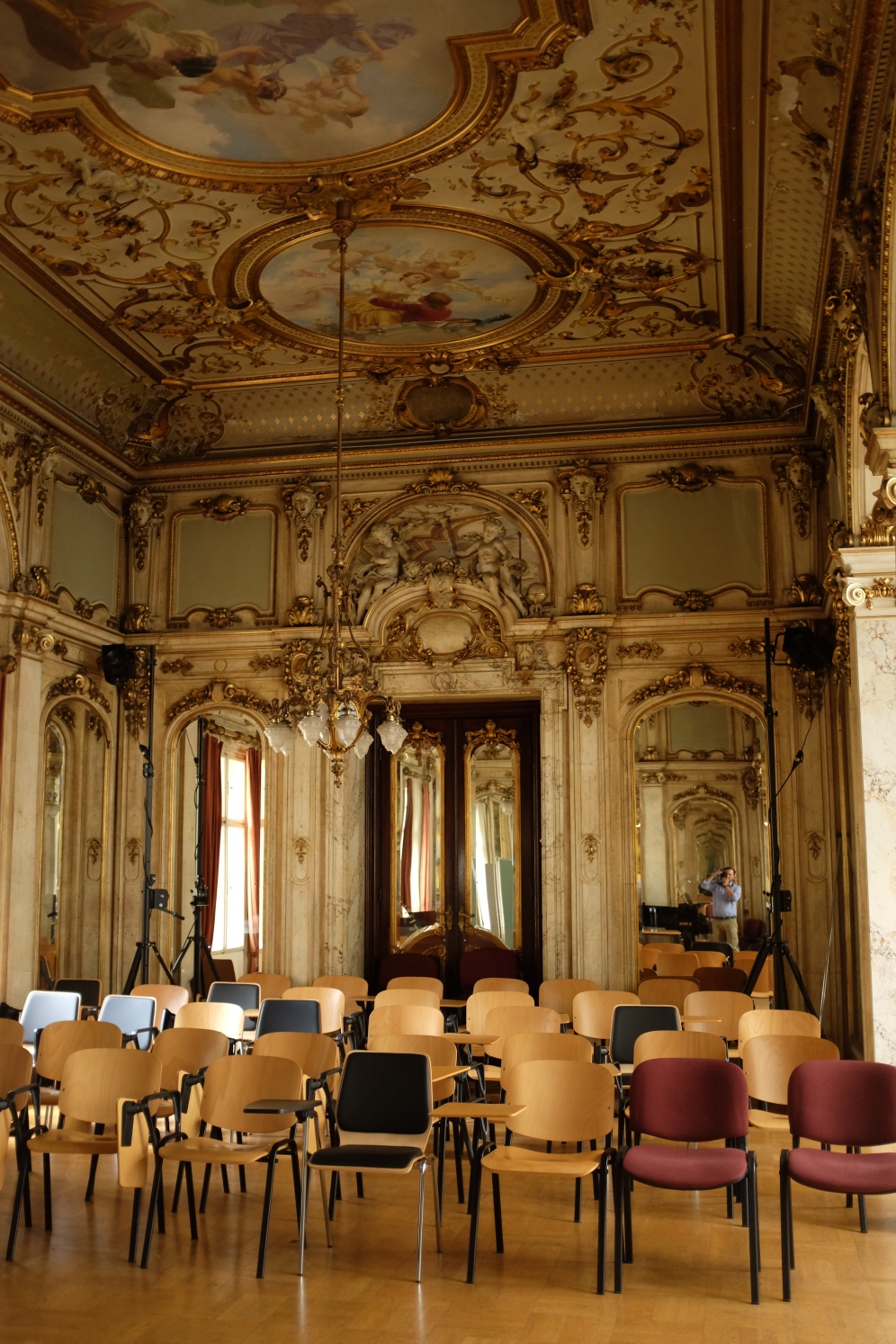 The Brats- The Wieners take their Wieners seriously. The first place I took the girls was the old hot dog stand across the street from the Opera house – the Bitzinger.  Hot dogs with cheese in them, spicy dogs, white brats, red brats, curry brats, spicy mustard, sweet mustard, amazing pretzels, the freshest, burn your nose hairs off horseradish.  Pair that with all kinds of awesome beers-what’s not to like?

The music and art  – Going to an opera or classic music is like going to the movies in Vienna. We took the girls to a concert with symphony, opera and a little ballet dancing to give them a taste of it all.  We also went to a children’s symphony of Peter and the Wolf. Probably wasn’t their favorite thing, but the music really reminded me of being back in Vienna.  Kelly and I even got to sit for awhile in front of the Opera House and watch Macbeth live on the big screen.

Hallstaat – About a 4 hour train ride from Vienna, Hallstatt is an ancient town that was the center of salt mining in the region.  It is probably the most beautiful place that I have even been.  We took the steepest funicular up the mountain, put on some canvas overalls, and took a tour of the mines. By the way, this is where Hitler hid stolen Nazi art (per George Clooney’s film Monuments Men). The best part about the trip was sliding down the wooden slides the miners used to get to different levels.

The day we left we rented electric boats and a huge Swan paddleboat and got out on Lake Hallstatt.  The girls couldn’t be happier – they each had a chance to drive us around.  From here you could really see why they girls thought that Hallstatt looked like a storybook village.

The funniest part about visiting Hallstatt was that the tourists there were 95% Chinese. When I asked a local why, she mentioned that someone in China built an exact replica of the town of Hallstatt (unbeknownst to the Austrians) as a Chinese housing development. 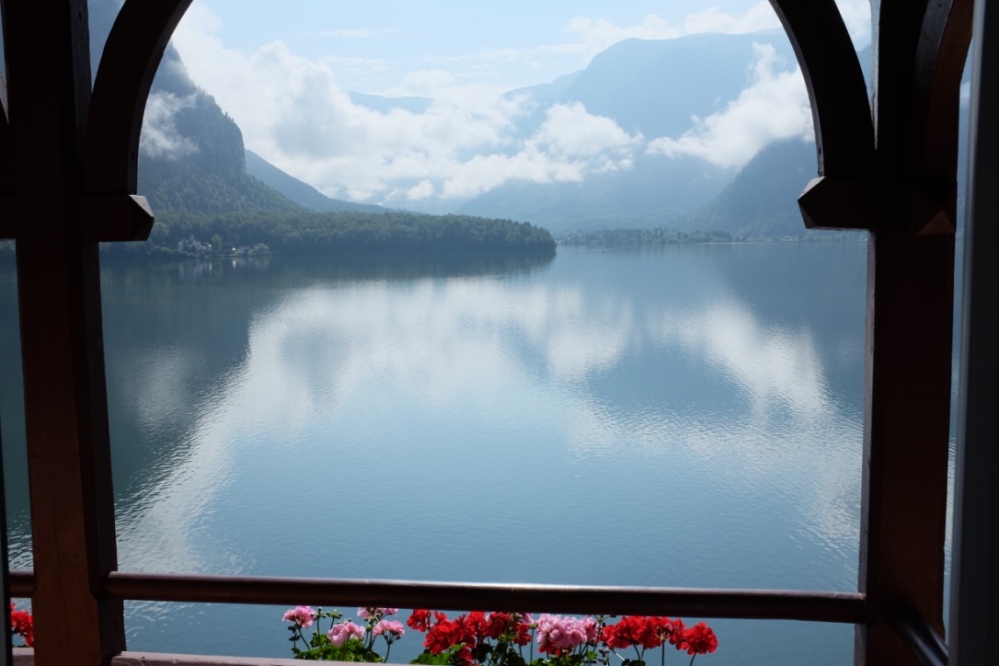 Room with a ridiculous view 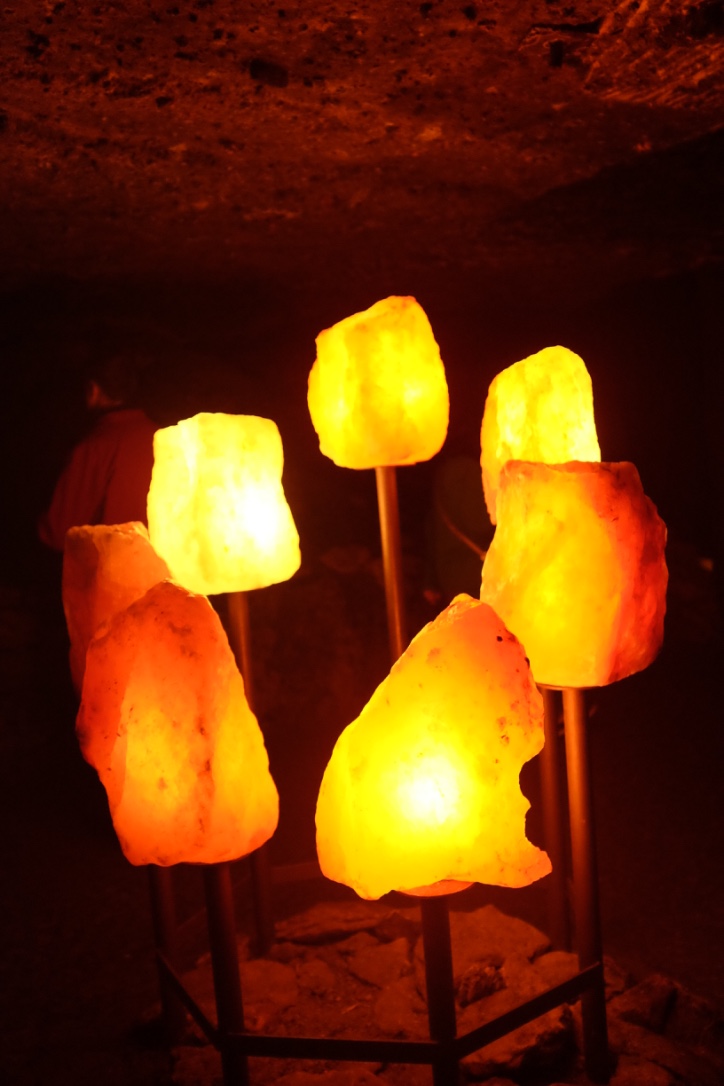 The magic rocks the Sleestack used in Land of the Lost 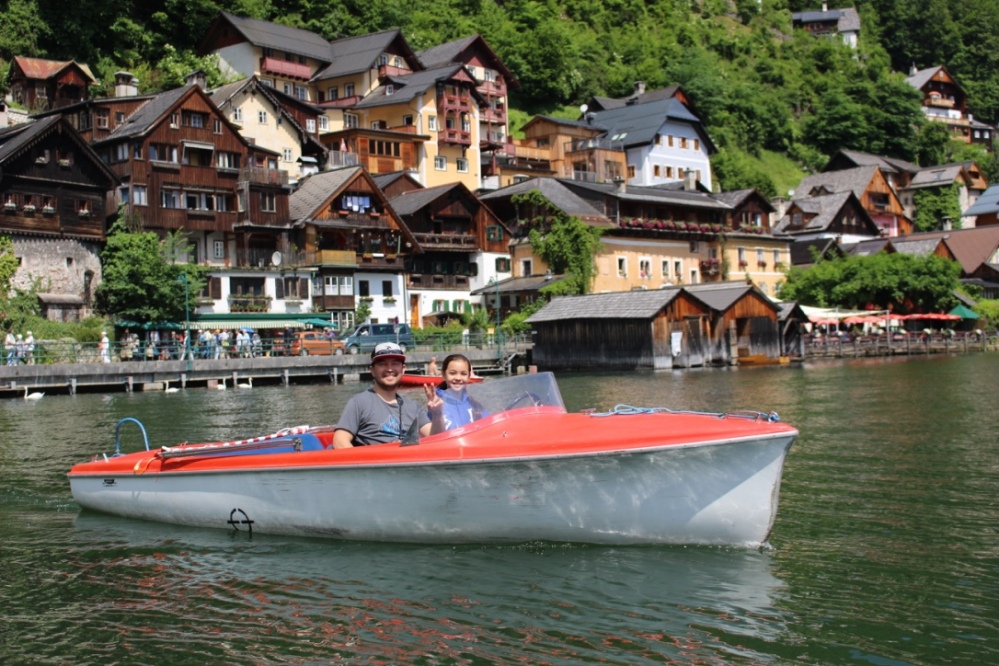 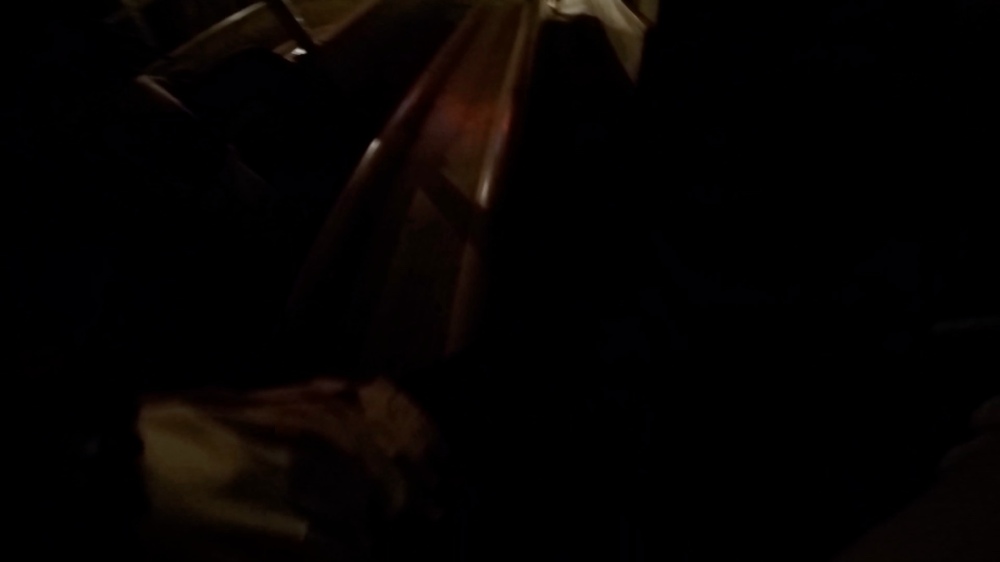 Escape Hunt – The girls of course loved another day at Escape Hunt.  We first found this mystery game in Portugal and the girls had been waiting to find another one ever since.  This is where you get locked in a room and try to figure out the clues in order to get out in an hours time.  This was just recently opened in Vienna and great fun – we did a Mozart mystery and liked it so much, we did The Third Man Mystery as well. 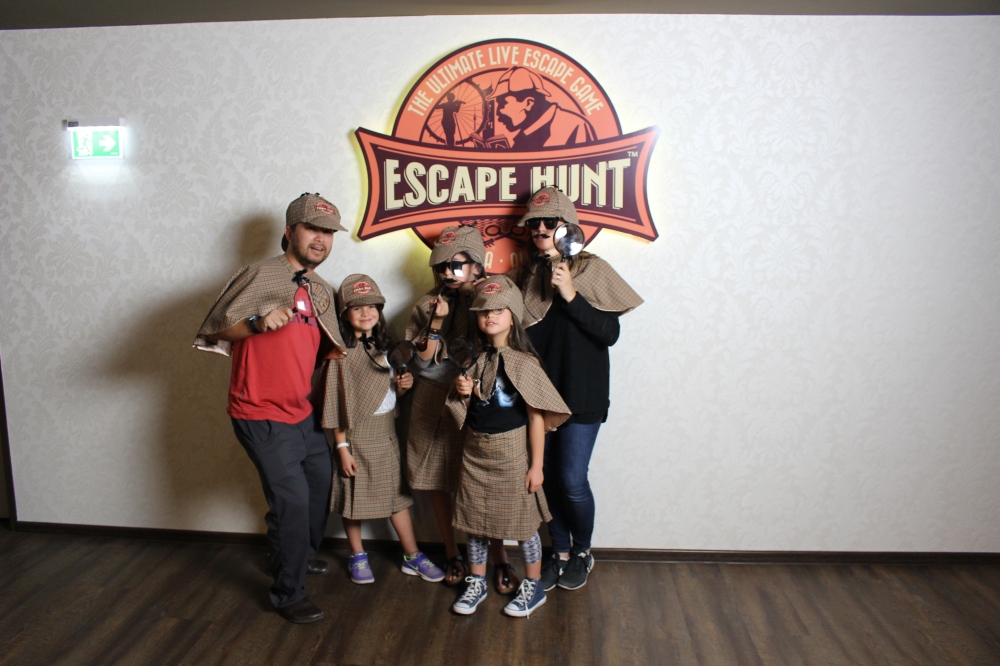 From email to Facebook – Thanks to modern social media, I found out that an old childhood friend from the 4th grade, Phil Nery, was going to be in Vienna for work at the we were, so I had a chance to catch up with him at a cafe. A nice surprise.

I was really glad that I made it back. The girls all loved the city and said they would miss it. Maybe they will study here one day. For now they are Wieners at heart.

Spent many hours at this (formerly) smoke filled cafe