A few days ago my family and I went to Disneyland in Hong Kong.  It truly is the happiest place on Earth. (Or it better be, becuase if it’s not, that’s false advertising).  We all loved it because there were literally no lines. 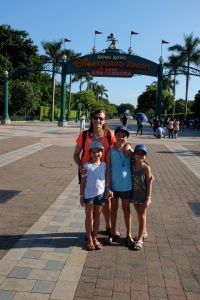 The first land we visited was Tomorrowland.  That was my favorite.  We went on the BuzzLightYear Ride where you have a laser gun and aim and the Zurg targets.

It was soooooo fun!!!  I got as high as 499,700 points!  We did the ride five times since there were no line.  After we got tired of BuzzLightYear, Space Mountian caught my eye, though I’m not sure why.  I had never been on a big rollercoaster, they just weren’t my thing.  But there I was with my dad, riding Space Mountian.  When I was off the ride I had the biggest smile on my face, because it was AMAZING!!!  I wanted to go again, but the ride had ended just in time for the last session of the Stitch encounter and Stitch is my favorite Disney character, so naturally we went to that.  That was amazing too.  Stitch would talk to a few people in the crowd, and it was hilarious!!  Then Evil Captian Gantu tries to kidnap Stitich, so the audience has to tell him what door to use so that he can get to his cruiser.  In the end he made it and got away safley.  Whew!  What a relief!  Well, we said goodbye to Stitch and were on our way.

We had done what we wanted to do in Tomorrowland, so we headed down to Fantasyland. The first thing we did was It’s a Small World, which is my Grandpa’s favorite ride.  It’s one of my favorites too.  It was fairly new, and my favorite countries were Japan and Hawaii.  The girls from Japan were dressed in kimonos, and the girls from Hawaii were doing the hula!  Also in Hawaii there were volcanos. 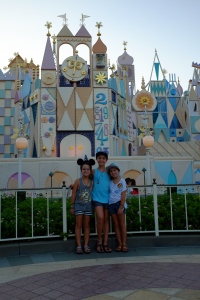 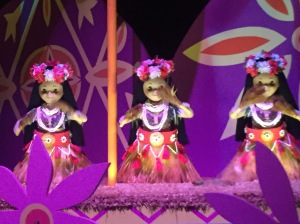 After the ride, we went to the Mad Hatter Teacups.  The girls and I hopped into a blue one and spun away!!!  We spun as fast as we could.  Good thing our mom didn’t come with us, she would have gotten VERY motion sick, and nobody wants that.  Well the teacups and Small World were fun, but the carousel was great too.  Again, it didn’t have a line.  I picked a horse that was cream with a mane and tail that looked like the color of a perfectly roasted marshmallow.  And because I love horses, I named mine.  Her name was Sunshine. 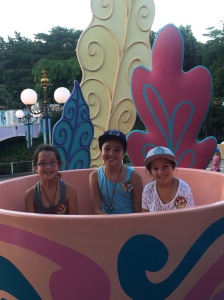 We still had to go on the Dumbo ride, which was the only thing that had a line.  A line that wasn’t very big.  We just had to wait 2 minuites.  I got to ride by myself in a blue one.  When the ride started, I went as high as I could and sat there looking at the view.  It was another short ride and was over quickly.  I wanted to ride Space Mountian again, but my dad and I couldn’t get through the parade so we walked around it while the twins watched with Mom.  Eventually we made our way over and rode again.  At the gift shop at the end of the ride, I got Star Wars Disney pins to share with the twins.  The one I took was Stitch dressed like Yoda!!!!!  So cool!!!!  But the thing that really held us back was the Darth Vader mask.  We took turns trying it on.  When you flipped a switch whatever you said sounded like Darth Vader!  It was really cool, but it was $55 US dollars, so we only left with the pins.  The twins wanted to go on BuzzLight Year again, so we did it for a sixth time.  I scored really high again.

After the ride it was our chance to stock up on everything Disney.  I got a Hong Kong Disney pin, Tsum Tsum stickers, and a Stitch keychain!  It was so cool.  The next ride was Orbitron which was like Dumbo, just saucers in Space.

The final ride was Autopia, where you drive cars that are on a track.  You weren’t in full control, but it was still fun.  That’s what we did instead of the fireworks show, but we did watch it from the cars.  They were actually pretty, and we got to see a good chunk of the show.  Then we walked down main steet and got Mickey Waffles and stayed until the Park closed.  All in all it was a great day.