Faial, the island of my ancestors.  This is the island that started the whole discussion about coming to the Azores to see where my great grandma was from.  We were excited to land here and we weren’t disappointed.  Again, a beautiful, lush, green island.  We were staying at the Porto Pim apartments in Porto Pim Bay, a beautiful bay near the main part of the island, Horta, but just far enough away that it was quiet and quaint.  And it happened that we were a two minute walk from the church where my great grandma was baptized, so that was a bonus, but more on that in another post. 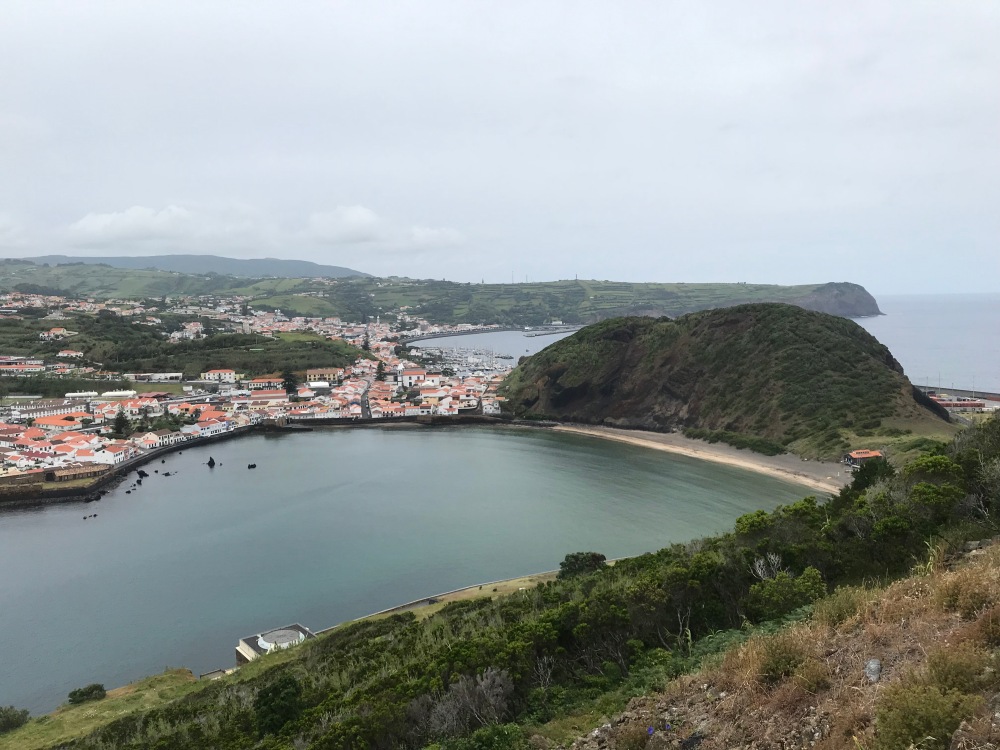 Porto Pim Bay. Our apartment was all the way right, to the left of the mountain.

Our first full day on the island we went on a tour with Azores Experiences with our awesome guides Felipe Avila and Leandro.  Once Felipe heard that my mom was Azorean and her grandma was from Faial, he tailored our tour to a something a little more cultural.  With the last name of Avila, we thought he might be a long lost cousin since that is my great grandma’s family name, but we never quite made the connection.  He added our first stop of the day so that we could see a typical Azorean house.  This one had been redone for the purpose of preserving the culture and how they once lived.  It was interesting to hear that Felipe, who was not much older than me, remembered his grandmother’s house being very similar to what we went to see. 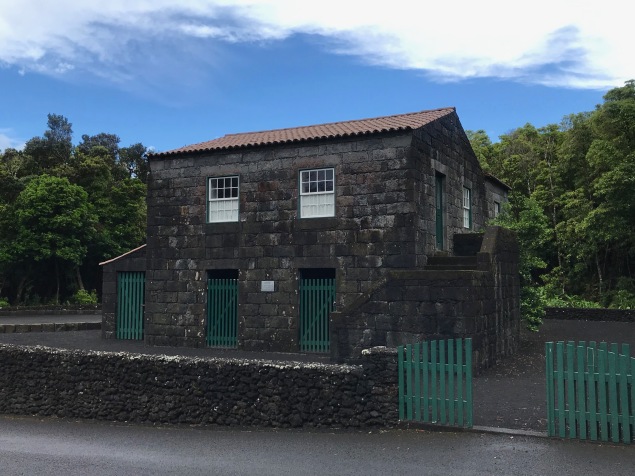 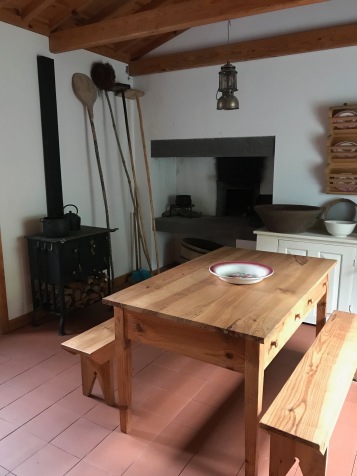 The main part of our day was spent learning about volcanoes and the eruption of Capelinhos.  This was truly a unique experience and one I will never forget.  This eruption lasted for 13 months, from September 27, 1957 until October 24, 1958, much of it captured in photographs and descriptions from the light house keeper at the time.  Homes and land in the nearby villages of Capelo and Praia do Norte were devastated.  The aftermath looks like you are walking on some other planet with the black volcanic sand in all directions.

We learned about the Azores Refugee Act of 1958, that then Senator John F. Kennedy passed to help those affected by this volcanic eruption.  It resulted in half the population of Capelo leaving the Azores for America.  The museum here, the Volcano Interpretation Center of Capelinhos, is probably one of the best that I have been too.  The building is buried so it does not interfere with the landscape, and part of the museum is even in the lighthouse building that is still buried underneath the volcanic ash.  When you emerge you are able to walk to the top of the lighthouse for an amazing view. 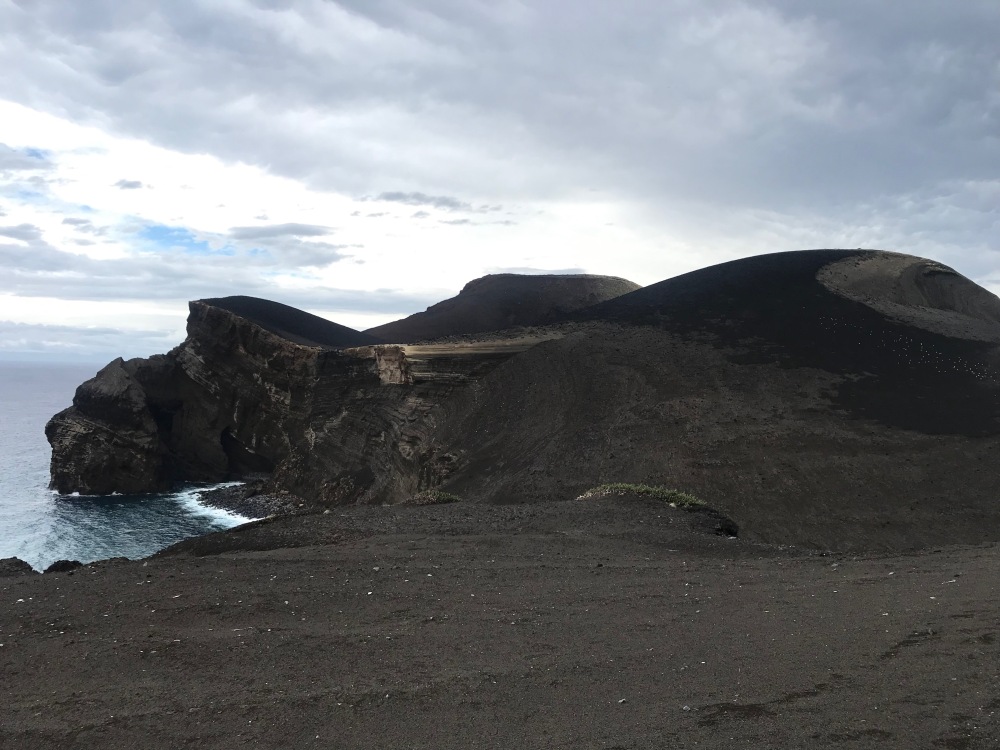 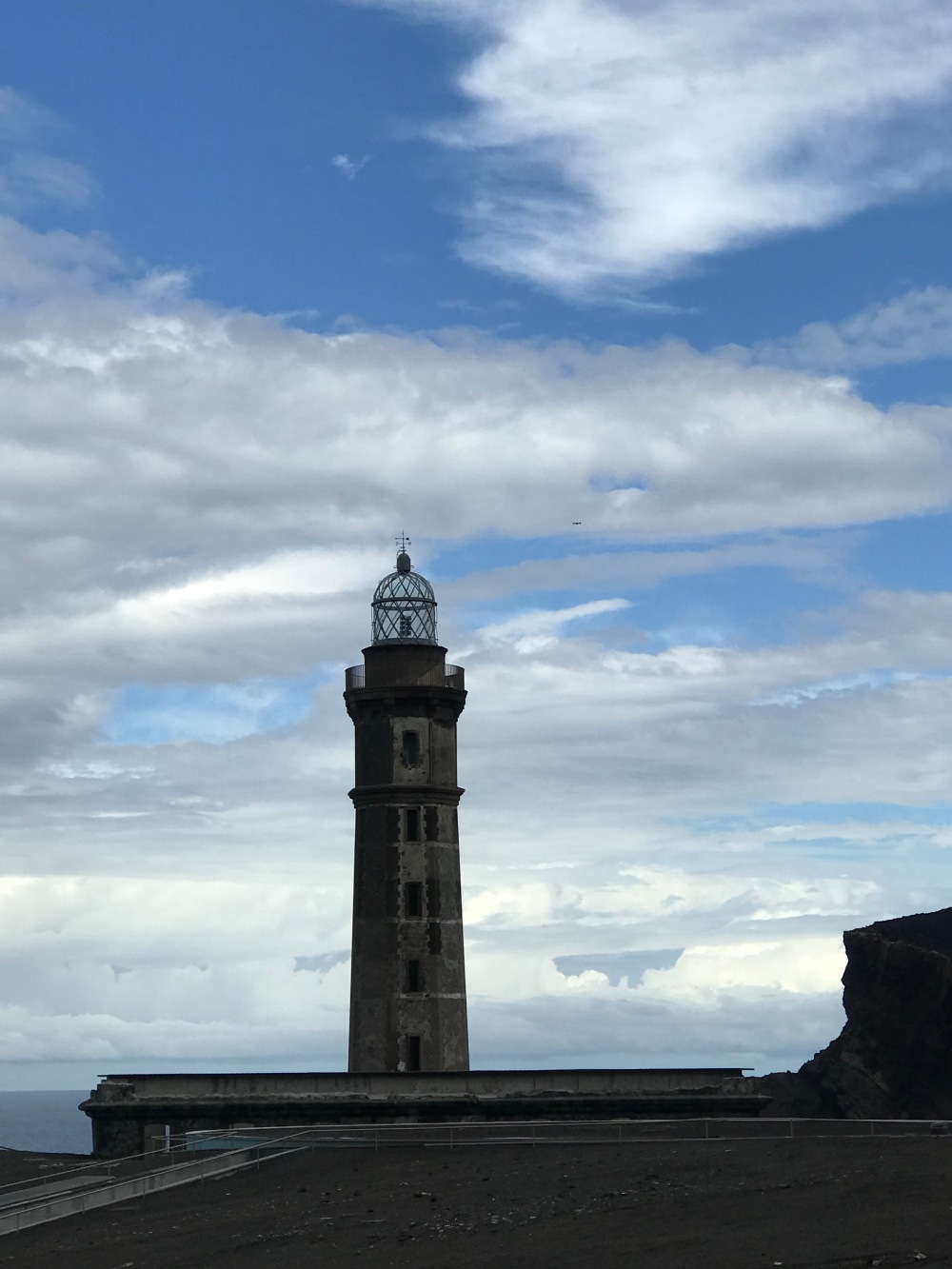 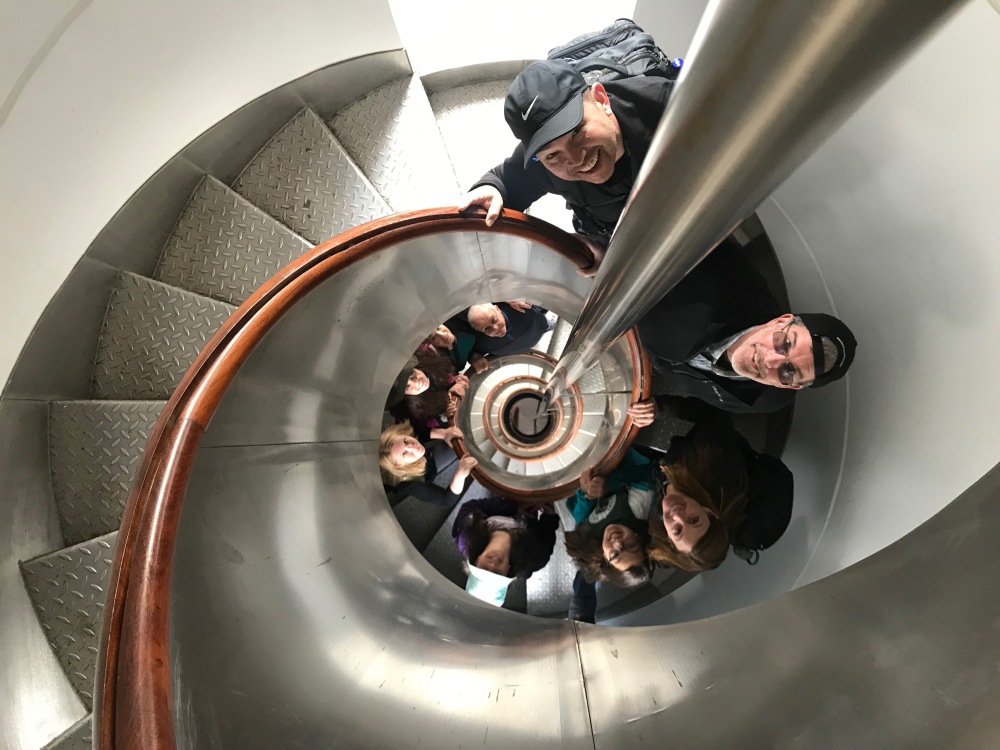 Our lunch was special and spent at Felipe’s family’s restaurant, Campo Dos Sabores.  Connected to this is Pitch and Putt Golf, which made my dad very happy.  He actually got to hit a few balls before we left. The girls, Dave and Krieg even got out there in the rain with him. Lunch did not disappoint with homemade, delicious Azorean fare including cheese from the islands, linguisa – a family favorite, homemade jams from Felipe’s family farm, fresh pea soup and of course wine. 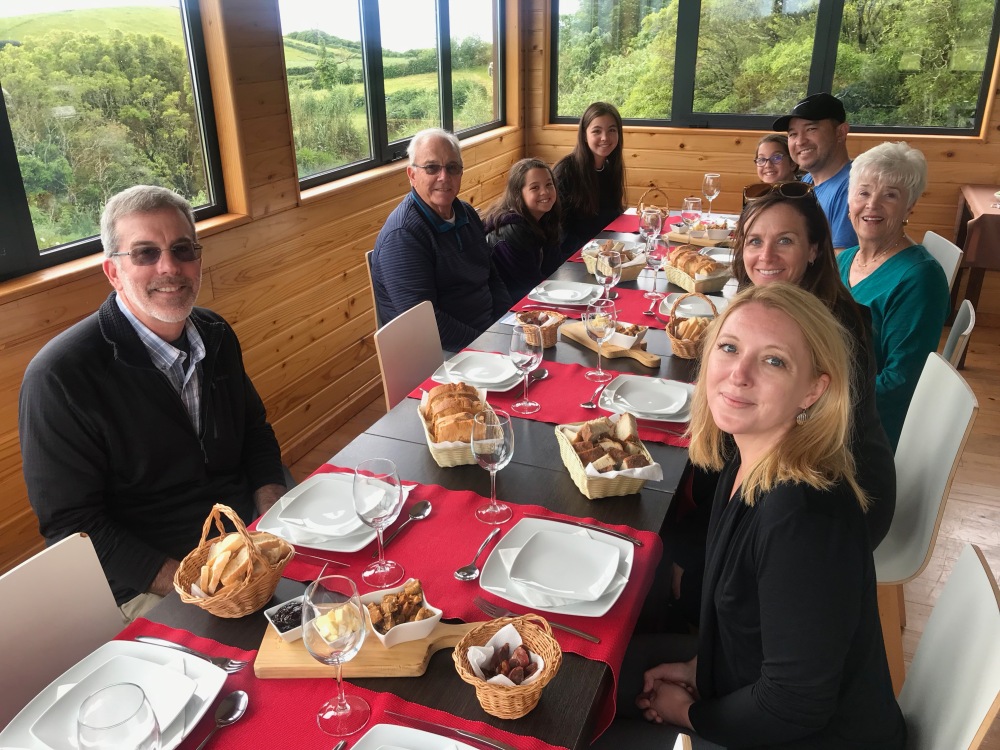 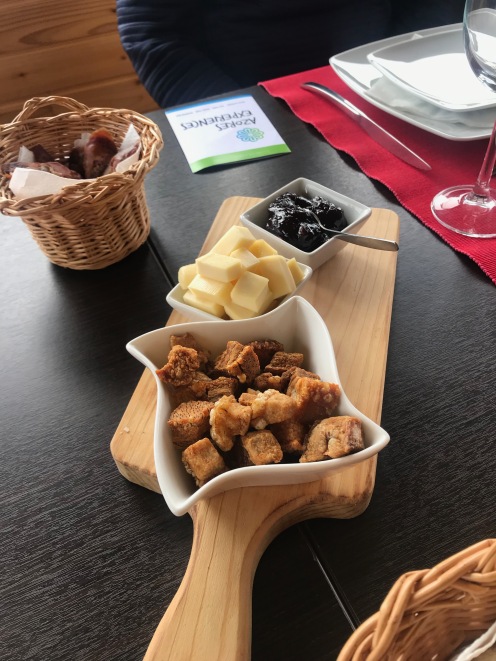 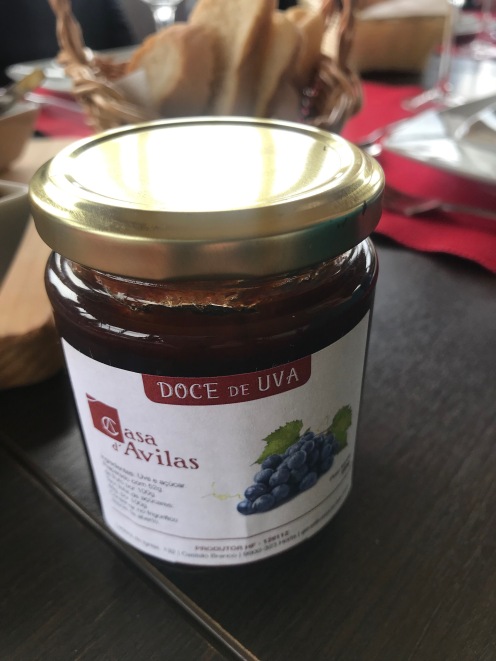 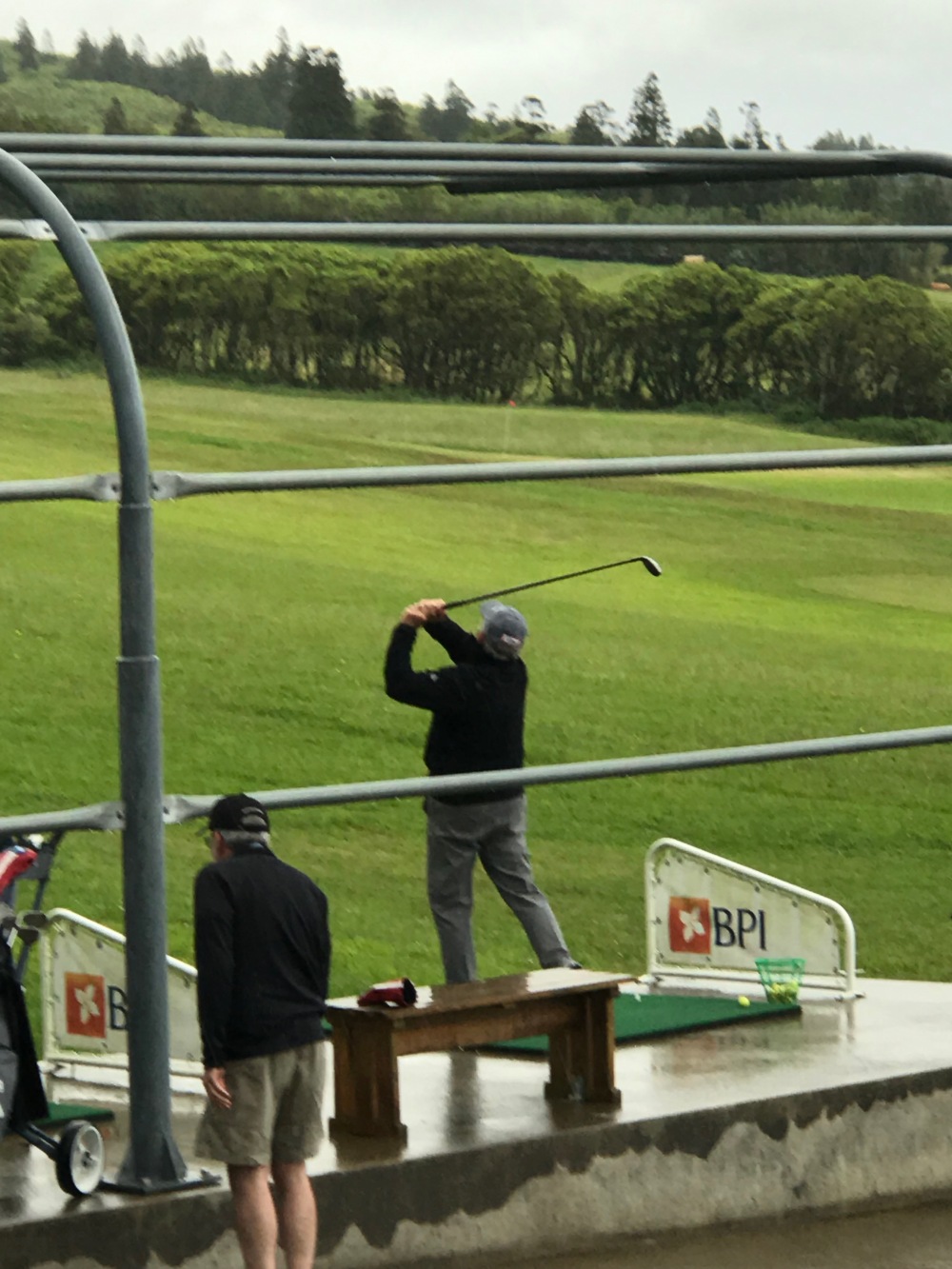 We had a little rain at times and there was definitely some fog as we drove up Caldeira do Faial that afternoon, but we are used to that in San Francisco and it didn’t bother us at all.  It actually gave the volcanoes a mysterious quality. 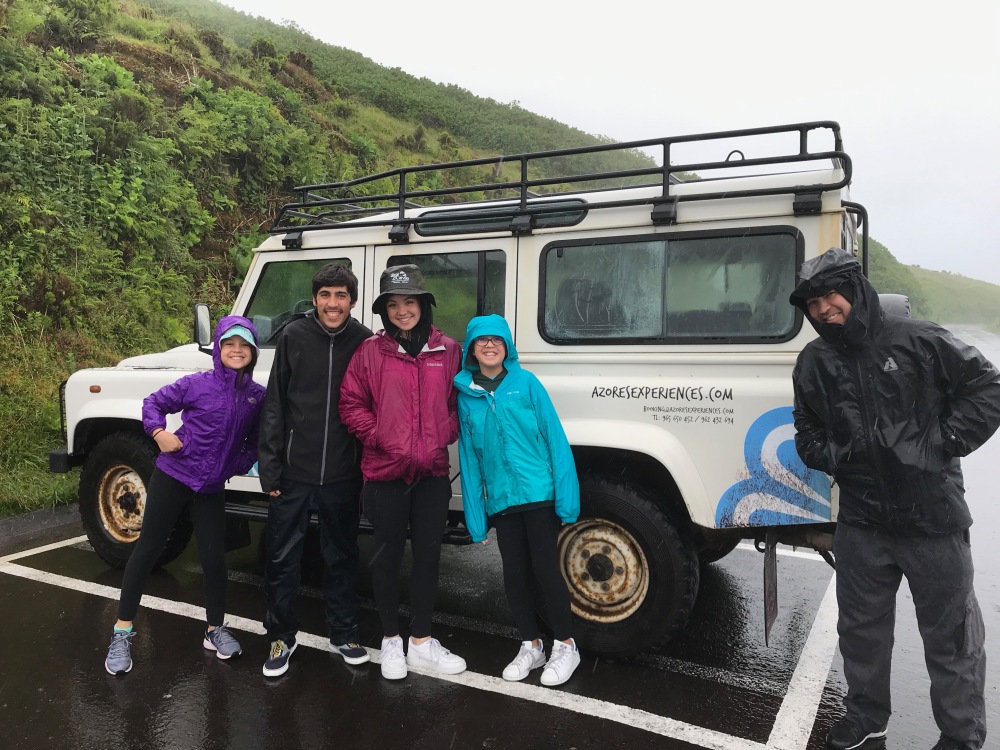 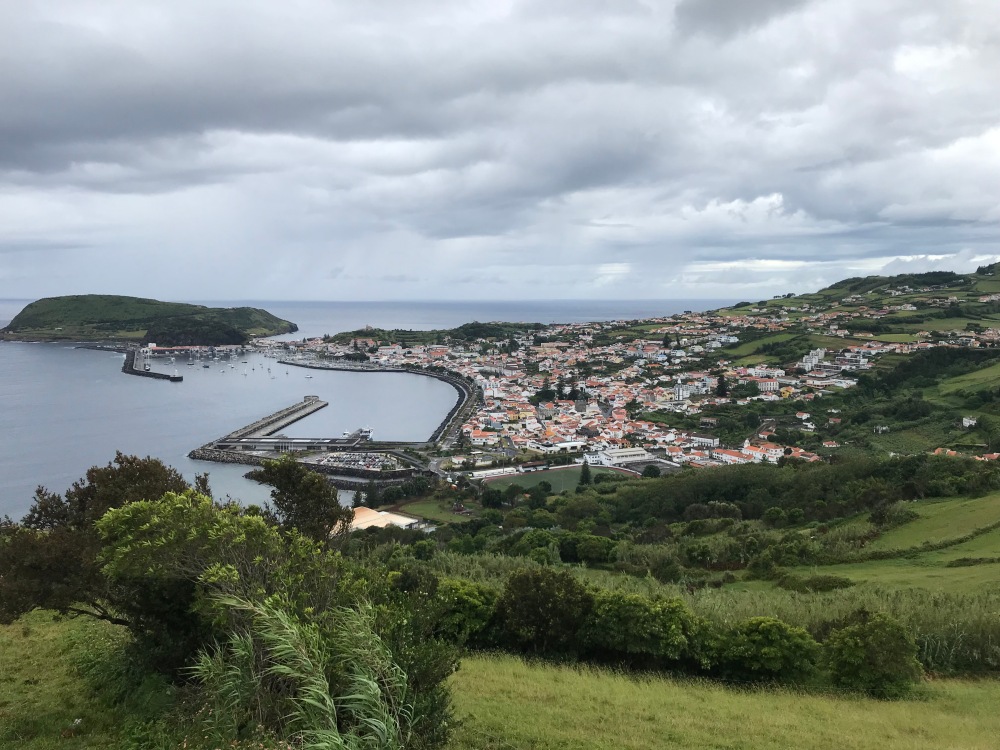 Overall, the day did not disappoint.