After spending 3 weeks in Barcelona and getting our bearings set in Europe, it was time to ramble on – to Andalucia -a short one hour flight away.  When we landed we were hit with the coldest weather we have had so far – in the low 30’s and for a couple of days the high was only in the 40’s!  (In Chicago this would be called “summer”).  But we came prepared and bought some cold weather clothes in Barcelona. Keep in mind that it has pretty much been summer for the entire trip from August to January. Though it was cold, it was crisp and clear -clear enough to see the snow capped Sierra Nevada mountains in the distance. 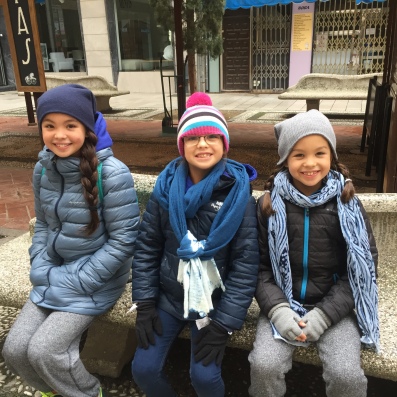 We once again lucked out with the location of where we stayed. We have mainly used Tripadvisor, Bookings.com, and Airbnb this entire trip.  We were on Gran Via-one of the main boulevards walking distance to the cathedral and quaint streets where locals and tourists alike seemed to congregate.  What Kelly and I noticed was that it didn’t matter how cold is was, people were sitting outside the cafes enjoying their time and drinking cold beer all bundled up.  The other thing we noticed were all the fur coats everywhere-old school.

We were also close to El Albaicin neighborhood, which is the muslim quarter of the city.   I found a great Shawarma place for dinner, partly out of sheer necessity. We checked into our hotel at around dinner time, we didn’t have time to hit the grocery store, and the starving kids didn’t want to leave the room to eat out as they were tired and it was raining and freezing cold outside. I think we went back 3 times.  It’s called Marchica Shawarma and worth looking for. While I love Spanish food, it was nice to have something different besides Jamon, queso y pan.

We also found this narrow, winding street called La Calle Calderería Nueva.  Its middle eastern themed shops were full of beautiful tile work, leather, hookahs and colorful, glass mosaic lamps. It also had an array of clothes that would be best described as Grateful Dead Chic-drab, loose clothing that is easy to spin around in. A store like this on the Haight would make a fortune.

We took a small bus to the top of the El Albaicin neighborhood to Mirador de San Nicolas. This was a great look out point to see The Alhambra across the way. 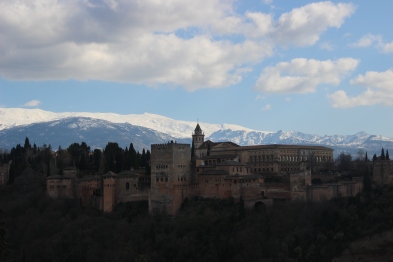 There were stalls set up selling handmade goods. The girls got bookmarks with their names written in Arabic. There were also locals playing Spanish guitar, clapping, singing, and dancing. I felt like we I was at an outdoor Gypsy Kings concert.   My mom asked one of the vendors where to have lunch and we wandered around the cobblestone streets for a while to find the restaurant Casa Torcuato-a boisterous place filled with locals where you throw your used napkins on the ground. We had a great lunch of grilled fish, Spanish omelettes, and potatas bravas with spanish beer served in wine glasses-classy. 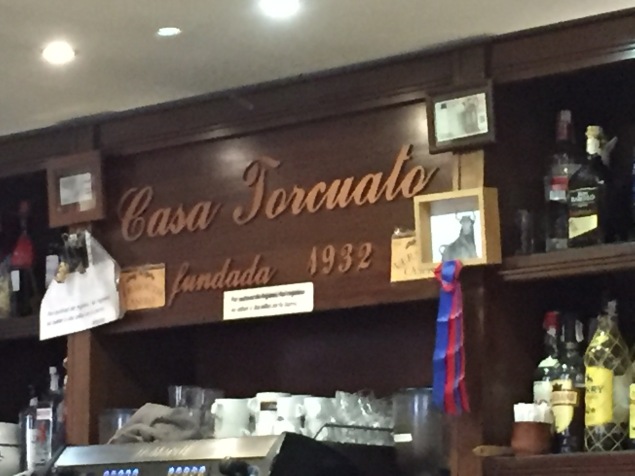 One thing I have noticed this entire trip is how much more affordable it is to eat out. Granted we live in San Francisco, but we can have an entire meal with drinks for 5 people for about 40ish euros. And tipping doesn’t really exist in most countries we’ve been to on this trip.

On our last day we took a group tour to the Alhambra, which was the main reason we went to Granada. This was the only day we could get a tour, the other days were totally sold out. Its the most visited monument in Spain. The girls were troopers for not only getting up early but walking around the grounds for 3 hours, which was probably one hour too long for them.  Kelly and I remembered it from our last trip to Spain, but it had been awhile.  The architecture was beautiful – archways, ornate ceilings, beautiful tiles. 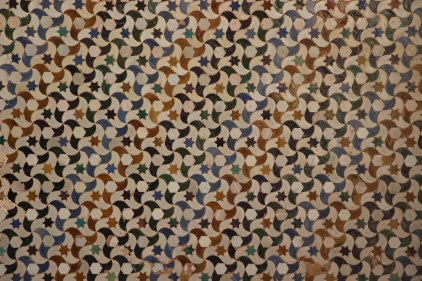 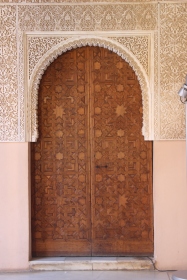 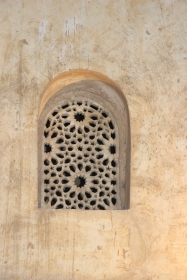 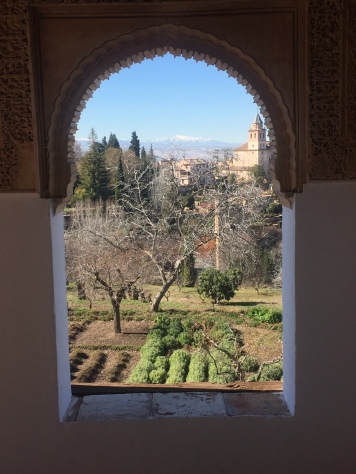 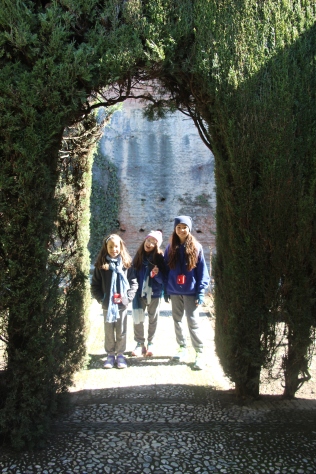 I liked the size of Granada, it was quieter than Barcelona and is more of a university town, with beautiful mountains and skiing nearby.