We have done so much in this beautiful country!  We really love it here. It is very chill and relaxed.  We are already talking about what we will do when we come back since we won’t have time to see all that we want in the South Island.  I think if we didn’t have tickets to head to Australia already, we might just stay 🙂

We aren’t always on the go even though it may seem that way with what we post.  But in between all the fun activities, we have down time just like at home.  We spend days cruising the towns we are staying in, hitting the stores and reading our books, going to the movies.  But there are amazing things to do here in New Zealand and I want to catch you up on a couple more things we did in Rotorua after the others went Zorbing.

I actually did something I was so terrified of, but had a amazing time – I went zip lining – and it was awesome!!  We all loved it!  We did it with a company called Rotorua Canopy Tours.  This is actually the only zip lining you can do in a native forest in New Zealand.  You are jumping out of platforms and walking on bridges way above the forest floor – the tallest jump was from a 500 year old remu tree –  72feet high!!!  It was good that we were in the canopy and could only see tops of trees – couldn’t really see the bottom of the forest floor so I didn’t know how far I really had to fall.  The longest zip line we did was 721 feet long from that same tree!! 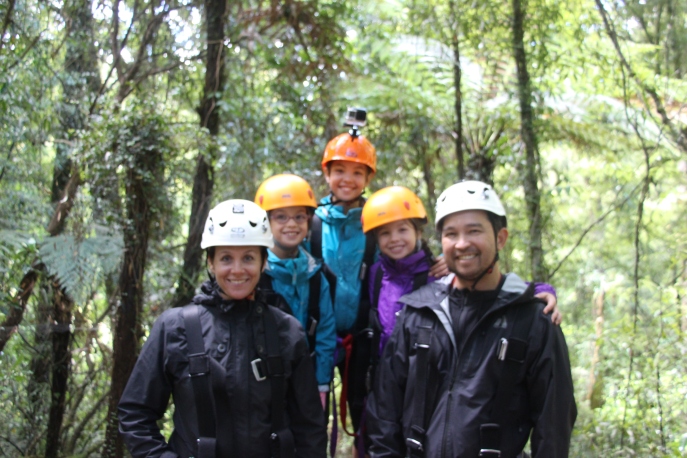 I have always been slightly terrified of ziplining for the obvious fear of falling, but this outfit was legit and I felt really safe.  So safe that by the end I was hanging upside down on my last run – of course no pics of me, but I have one of Claire.  Dave attempted upside down, but only made it about half way.  It helped that my girls were jumping off no problem and having a blast!

In addition to the zip lining, this company is also a conservation program that has been working since they opened to help save birds native to NZ that are in danger of becoming extinct.  They work to trap the rodents that are killing them off and have seen great progress in the birds and sounds they see in their forest each day.  The guides actually go with the group (10 people max) and tell you all about it as you go.  It’s very cool addition to ziplining.

Another cool thing we did was visit a place called Wingspan National Bird of Prey Center.  This is another conservation program in the area.  This one works mainly with the conservation of the New Zealand falcon.  It rehabilitates falcons as well as other birds, like owls, and when possible release them back into the wild.

We got to see the birds up close and watch an interactive flying display.  Very cool!  These falcons are the fastest birds in New Zealand.  They were beautiful to watch. 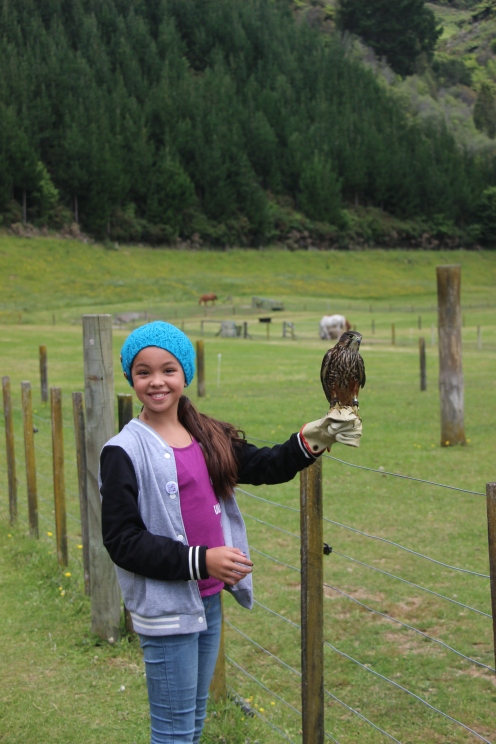 We have realized that what works with us on this trip is anything having to do with animals or art.  These are the things that most interest the  girls.  This particular day we learned a lot about the falcons and what they do at Wingspan.  They put the falcons though training each day to get them strong enough to go back to the wild. What they basically do is certain Falconry techniques that have been used for thousands of years. They use a long lure with wings on the end and the trainers swing it in the air. The falcons, thinking it is a bird, follow it and try to capture it.  The trainer continues to whip the lure around and around while the falcon tries to catch it.  Eventually the trainer lets them so that they can get their “reward” – typically raw chicken.

These birds are threatened for a variety of reasons – they breed on the ground and that makes their nests with eggs and babies easy targets for those animals that prey upon them, shooting from humans, electrocution from wires, just to name a few.  It’s good for the girls to hear about this and realize that there are many different ways they can make a difference in the world once they decide what they want to pursue.

So many great things to learn here in New Zealand! Caw Caw!!!