We have been on the road for a little over 13 weeks.  That’s crazy when I think about it, but at the same time, Tokyo seems so long ago and we were so new at traveling as a family.  Now 13 weeks later, what’s it really like?  Well, it has its ups and it has its downs just like if we were living at home. 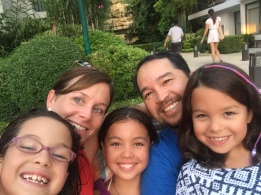 First off, we are still traveling with our carry on luggage and doing just fine, although Lauren is tiring of the same clothes – mind you she has bought a bunch of new stuff on the road.  We are so much better off packing light.  We can get in and out of trains faster, we can all fit in one cab together, and packing up doesn’t take that long.  Claire might start running out of room soon with all of her little things she squeezes in there, but we are working on it.  And really, wearing the same things hasn’t bothered me too much. Laundry has been fairly easy to get done when we don’t have a washing machine. In Thailand there was a place around the corner from the hotel that charged a little over $1 for 1 kilogram of laundry – about 2.2 pounds.   Drop it off in the morning, pick it up around 7:30pm all washed and folded.  I could get used to that!!!  Actually I might be looking into wash and fold in the city the minute I get home!  Doubt the price is as good 🙂

I haven’t gotten rid of much, which means I must have packed well – one pair of pants, a dress, and a flat iron – gone are those days, not even sure what I was thinking.  I added a cool handmade top in Chiang Mai, so I got rid of one tank top.  I am looking forward to adding a few things whenever I might see something.

We are opting for bigger places to stay out the city center when we can, especially serviced apartments which have laundry in room and maid service, plus they are usually bigger.  And often times being out of the city center means we aren’t dealing with the craziness at all times.

How are the girls getting along?  I have to say, pretty well.  I have been thinking about this a lot because there are times where they are fighting (yes even on the road) and driving us crazy, but then I think about it and realize that we are spending 24 hours a day, 7 days a week together – fighting is bound to happen, especially in close quraters.  But there are more times where they are playing in the pool together, or working on Mine Craft together, or practicing hairstyles and playing endless games of Uno and gin.  Oh, and watching The Voice – they are very into The Voice right now!   The good is definitely outweighing the bad.  If they could just tone down the bickering in cabs, Dave and I would feel much better.  Why is it that the minute we get in a cab, me in the back with all 3 girls and Dave in the front all by himself, they start in on each other.  “your touching me!”  “Get over on your side!”  Like there’s a side with 4 people in the back seat!  It’s enough to drive both of us crazy!!!!

Really, when will we ever get to say that we spent every day together for a year and pretty much got along the whole time? When will we ever get this chance again?  To just hang out and do something together every day with no homework, housework, laundry, sports, etc.  I have spent more time in the pool, I mean really time in the pool, playing with the girls than I ever have before.  I am able to help them with projects, read Harry Potter with the twins, watch The Voice with them, talk about anything that comes up and never feel like I have something else to do.  It really is a once in a lifetime chance.  Don’t get me wrong – we have our days and more than once I’ve wanted to throw in the towel, but it all comes around in the end.

The homework situation could be better.  To get them to focus can be difficult.  There are no set days and times because it depends on what else we are doing that day.  If I come home from a day of sightseeing and am exhausted, I can only imagine how they feel, so school work doesn’t happen on those days.  Really sightseeing is part of the education.  I would just like to have them work on each subject a few times a week – math, spanish and reading.  We research different things on the web depending on where we are and what we have seen – temples in Cambodia, elephants in Thailand, maybe just the country itself.  Each girl is trying to complete a project for each country.  Slow going, but going.  What they are seeing out in the world is a great education in and of itself, but it is on my mind each day that they need to keep up to go back to school next year.  I ordered cursive books for the twins because they have been dying to learn.  Dave’s dad brought them last week and Grace is almost finished!

They do have their devices – ipad for Claire and Kindle Fire for the twins.  These are good and bad.  They would prefer to play on them and watch shows, listen to music, etc. then to do homework.  I don’t really blame them.  That’s a hard thing to do even for adults.  We too have to carve out time to do our work and then spend half the time surfing the net.  There are times when we want to throw them out the window!!!!  Times where we have locked them in the safe with a code the kids don’t know. Setting limits can be hard too because it’s not like we have a house full of toys, books, games, etc. at their disposal to keep them entertained.

We just missed our first flight on the way to Bali of all places.  Manila has a bad traffic problem to begin with, but with the APEC conferece (Obama was there) it was worse.  We planned to leave our hotel, which was only 3 miles from the airport, 5 hours early.  When they came to get our luggage, they said all roads to the airport were closed due to dignitaries coming in.  When we finally left, still 3 hours early, we never made it.  It took over 3 hours to go those 3 short miles!!!! Our flight was on the tarmac with doors closed 😦  Dave literally thought we would sleep in the van for the night.  All worked out okay, but it was a long sleepless night.  The girls are learning how to travel for sure.  They slept in their first airport, the Jakarta airport, and survived.