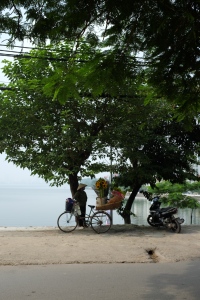 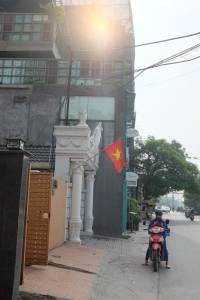 Vietnam was one of the places that I was really looking forward to visiting based on what I’ve heard from people. I remember my friend, Tom Green, visited sometime in the late 90’s and raved about it. I am an Anthony Bourdain fan and he loves Vietnam. Usually they say they like the people and the food- I do like a good bahn mi sandwich. I am also gaining a new appreciation for soups after the Ramen in Japan, so was also excited to try out the pho here as well. But the reason why it was so great was still somewhat ambiguous to me, so we planned to spend 3 weeks to check it our ourselves. I was thinking third world, jungle, crowded, communist.

So here’s how it went on our first stop in Vietnam- Hanoi:

We took a short two hour flight from Hong Kong to Hanoi in the afternoon. When we landed we did not expect to see a fairly new international airport which was almost empty. Keep in mind that at this point we had spent 3 weeks in Chinese cities which had just way too many people.

We were staying in the Tay Ho district of Hanoi, which is about 15 minutes from the old quarter/city center and sits on the edge of the city’s largest fresh water lake. I am glad that we randomly chose this part of town to stay as the old quarter was so crazy with scooters everywhere. It was great to take a short cab ride to the old quarter if we wanted to and then come back to a more sane part of town, especially for the kids. Tay Ho is also where a lot of the expats live in Hanoi.

View of Tay Ho from our Apartment

Both Kelly and I immediately got a good vibe about Hanoi, but we really couldn’t put our finger on it. Hanoi has a lot of rivers and lakes all around, so there is a lot of greenery. And while there are cars here (the import tax on cars is 150%) the primary mode of transportation is scooter – lots and lots of them.

What really struck us right away, especially since Vietnam is technically communist and we just came from China, is the amazing variety of food you can find here. I am starting to find out that I am starting to judge countries based on the types of cheese that are available. There is a specialty grocery store in the small mall under our apartment that pretty much rivals any Whole Foods back home.

We have also met lots of expats here who have given us the low down on things in Hanoi- where to buy things, where to go, good restaurants, etc. So we felt pretty welcome and plugged in right away. The first couple we met, on our first morning in Hanoi was a Canadian couple named Justin and Cynthia. We literally met on the street as I was contemplating getting a haircut and shave from an outdoor barber on the side of the road. It was my first haircut/shave on the entire trip, I figured the guy had customers so he must be ok. Kelly thought it was shady. So Justin and Cynthia walk by, I ask if they are from Hanoi, and if it’s kosher to get a haircut on the side of the street. Justin says he might not be the best person to ask as he takes off his baseball hat and reveals his bald head, but he gets a shave at a place down the street (which is indoors). We ended up hanging out with them several times in Hanoi. Justin also happens to be a float plane pilot on the airplane we were thinking of taking to Halong Bay. Small world. 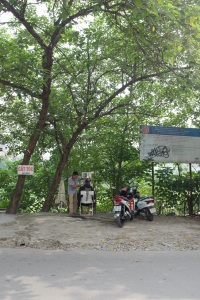 What’s so great about it?

The Food-not just the Vietnamese food. We had great tapas, Indian food, Japanese, and of course French. Kelly might like Vietnamese food more than Japanese food (What the…). Everything has to be fresh here as refrigeration isn’t as common as in the States. The produce here is great as well, we heard that the government banned all pesticides so everything is just as good as the $6 organic grapes you buy in the States. We have been eating lots of fresh spring rolls and pho for breakfast.

The Coffee-Vietnamese coffee (served both hot and cold) with condensed milk is both coffee and dessert. And it is STRONG. The kids love the hot chocolate here too.

The Prices- The 5 of us had messages (one hour for the adults, 30 minutes for the kids) for a grand total of $37. Of course for the kids it was their first ever message. Afterwards Grace said, “Life changing experience.” I think I’m screwed. We’ve had great meals at restaurants for around $40 all in. The also don’t tip in Vietnam, which I find kinda nice.

The Dong-my inner adolescent came out the first couple days (actually the entire time). The currency in Vietnam is the Dong. So Kelly got sick of me saying- Man, that purse is a lot of Dong or that tour is just too much Dong. And the exchange rate is around 22,000 dong to the dollar so most of our bills were north of 1,000,000 dong. So you kinda feel like a baller when you get bills that big.

Sure it can be hot and humid-and we were there during some of relatively cooler months. Yes there more trash on the streets compared to the U.S. Yes the traffic is cray cray-crossing the street can be a life and death experience. Its still a third world place. But surprisingly the third world aspects of Hanoi didn’t bother me one bit.

The vibe here is very international. It feels like things are happening here. We met expats from from Canada, the U.S. (Washington, Florida), Japan, Korea, Australia, and South Africa. The general feeling is that expats tend to stay longer then their initial time commitment since they like living here so much. Cynthia told us a story of a friend who tried to get demoted in order to stay longer. Justin’s son visited for the first time from Canada and after two weeks decided to pick up and move to Hanoi. That has to be a good sign for a country.

You really should check out Hanoi (and Vietnam in general). Its a place on the rise.

Now I get what all the fuss is about.

Claire at a communist themed cafe

Grace on the roof deck of the same cafe 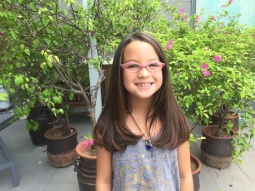 Lauren gets a haircut (not on the roadside)